You are here: Home / To speak is to exist – the case of endangered languages in Brazil and Ecuador

Endangered Languages and their Importance

An endangered language is a language that has a smaller and smaller speaker base and is typically no longer the mother tongue of the children in the area. The United Nations Educational, Scientific, and Cultural Organization(UNESCO) classifies languages as either safe, vulnerable, definitely endangered, severely endangered, critically endangered, or extinct. These classifications help linguists decide to what extent a language is endangered.

This begs the question – how do languages become endangered? How does this issue arise? The Cambridge Handbook of Endangered Languages says that language endangerment is affected by the number of speakers of a language, the areas in which the language can be used, and the support for or push against the language. Of course, sometimes more factors arise, and it is difficult to pinpoint the exact reason that has led to the decline of a language. Other factors that cause language loss include situations of conquest, economic pressures, immigration, language politics, attitudes for or against a certain language, and standardization. Whether political, economic, social, or cultural, there are many factors that can affect a language and cause it to lose its speaker base.

Indeed, why should endangered languages be preserved? Well, language loss is a human concern. Language is important to one’s culture and, when a language is lost, there is a cultural void and important knowledge is forgotten. Losing a language decreases our scientific understanding of the shapes and forms that human language can take. If a language containing a certain rare linguistic feature is lost, linguists may never find out that such a feature can exist in a human language. Languages also carry knowledge and information about the natural world that can be lost when the language becomes extinct. For example, knowledge of medical plants or knowledge of bird species may be contained within a language and lost when that language’s knowledge system is no longer passed on. Lastly, language is a human right. No person should be forced to stop speaking their language and no person should be told that their language is not valuable or worthy of being spoken. Languages can be preserved in many ways and most preservation work depends on governmental laws and programs, community support and participation, and an emphasis on the cultural value and importance of these languages.

The Case of Endangered Languages in Brazil 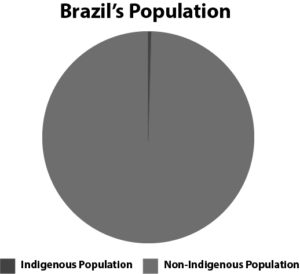 Indigenous communities make up a small percentage of Brazil’s total population. Although a small statistic, these communities are responsible for Brazil’s large linguistic diversity and speak the majority of Brazil’s endangered languages. Thus, this group should not be overlooked when policy makers consider language politics and language education.

The Case of Endangered Languages in Ecuador 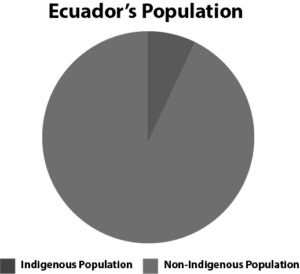 The indigenous population of Ecuador holds a much larger percent of the total population size than in Brazil. The country’s smaller land size may have an influence on this data or possibly the way citizens choose to identify on the census. No matter, the indigenous population of Ecuador is more present than in Brazil and is less easily overlooked. The large population of Quechua speakers in Ecuador, for example, influence the government’s responsibility towards bilingual programs and laws. Brazil does not have the same type of situation because the multiple languages spoken in Brazil are spoken by very small groups of speakers. We will now see whether or not this influences the governmental programs and policies in place for preserving endangered languages.

This section looks at the constitutional policies of both Brazil and Ecuador. A constitution highlight’s a country’s main goals, values, and governance. It also highlight’s a country’s official language and its educational and indigenous policies. Constitutional policies help us understand how governments plan for and respond to endangered and vulnerable languages. Of course, it is important to note that constitutions do not show the reality of a situation but simply highlight the ideal treatment of individuals.

Brazil’s latest constitution dates to 1988. In the constitution, there are multiple important articles relating to indigenous rights, language, and education. In terms of the official language, Article 13 states that Portuguese is the official language of Brazil. Nevertheless, article 210 gives indigenous communities the right to educate their children in their own language and using their own procedures. Thus, although indigenous languages are not official languages of the country they can be used as the language of education. Another important article for indigenous communities is Article 231. It states that the language, customs, and traditions of indigenous groups are recognized and that they are the owners of the land they traditionally occupied. These are the main portions of the constitution that relate to language rights and indigenous representation. As seen here, the Brazilian Constitution gives indigenous people rights to their land, customs, and language. Bilingual education is also allowed by the constitution. The document does not detail how this bilingual education is to take place nor does it detail ways in which indigenous languages will be protected. Language is a recognized right but it’s preservation and transmission are not explained in the constitution.

The Constitution of Ecuador includes similar elements. This Constitution dates back to 2008. It’s official language, stated in Article 2, is Spanish and Quechua and Shuar are recognized as official intercultural relations language. The article also states that other ancestral languages are of official use in indigenous villages and that the state will respect and stimulate the conservation and use of ancestral languages. It is really pivotal that the state recognizes two indigenous languages for official intercultural relations and that the state directly claims it will help conserve indigenous languages. In terms of land recognition, Article 242 separates indigenous lands under the title of special regimes. Article 29 and 347 refer to education. These articles give everyone in Ecuador the right to education in their own language and respective of their individual customs. Furthermore, these articles say that bilingual education is allowed and the way that bilingual education will take place is fully detailed. Many other articles refer to indigenous rights but these are the most important ones. It is interesting that Ecuador gives extensive thought to indigenous, ancestral, languages and that a bilingual education system is specifically put in place.

Comparing the two constitutions, Ecuador’s constitution is more specific and mentions indigenous populations far more than Brazil’s constitution. Indigenous communities make up a larger percentage of Ecuador’s total population and certain languages such as Quechua and Shuar have larger speaker bases than the languages present in Brazil. This may be one reason why the constitutions differ in their focus on language. Ecuador also includes certain indigenous languages as official intercultural languages and directly claims it will help conserve and preserve other ancestral languages. Brazil, a country with a much greater number of endangered languages, does not have such claims. These are interesting differences that portray the different level of importance placed by each country on preserving languages and indigenous knowledge. It is important for there to be a cultural value placed on minority languages and for constitutions to recognize the rights of indigenous groups.

I will now turn to the Ministry of Culture and Education for Brazil and Ecuador in order to understand how the states use education to support, document, or revitalize endangered languages. Specifically, I will use the UNESCO and International Bureau of Education (IBE) World Data on Education reports to understand what sort of educational policies are promoted by the states.

Ecuador has similar educational policies to Brazil. Ecuador defines itself as a multilingual and plurinacional country that respects the different languages spoken within its borders. The country also has a 7% indigenous population that is growing at a fast rate- making indigenous education a priority. The UNESCO-IBM World Education Report (2010) shows that Ecuador has created a well-detailed bilingual education plan. The report (2010) says the plans prioritize the method of teaching over the content being taught. This has also made the plan more flexible and means that it has been effective in multiple parts of Ecuador- not just cities. Ecuador also has a National Direction for Intercultural Bilingual Indigenous Education that creates and monitors indigenous education. In the year 2007, the report (2010) shows, there was an enrollment rate in bilingual bachelors programs of 107,694 students. This is a large amount of students to enter higher education as part of a bilingual program- the majority of these students spoke Quechua. These bilingual programs have been very effective and have led to more indigenous people going on to higher education. Discrimination, however, is still an issue. There are still some parents who choose not to teach Quechua to their children for fear that their children will be discriminated against. Overall, Ecuador’s bilingual programs are a success and are promoting the conversation and use of endangered, indigenous languages.

The biggest difference between the bilingual education programs in Brazil and Ecuador is linguistic diversity. Brazil is faced with such a large linguistic diversity that documenting and creating educational opportunities for all the languages present is a challenge. Ecuador has such a large population of Quechua speakers that they can more easily create bilingual opportunities for these citizens, although they do face difficulties with accommodating the various dialects of Quechua present in the country. Conversely, with the great amount of endangered languages in Brazil, it is vital for future policy makers to promote and conserve these languages. Indigenous populations need to have a right to educate their communities in their own language and they need to have access to self-representation so that these rights are not taken away from them.

There are close ties between questions of language, identity, citizenship, and environment and they are ones that make this discussion multi-faceted. For this reason, it is important to look at how discussing endangered languages coincides with discussions of indigenous rights and indigenous representations. Many of the educational policies and constitutional rights in place are laws and policies effecting the conservation of indigenous ways of life and indigenous knowledge. Language is just one part of this conservation effort. For this reason, organizations such as CONAIE – La Confederacion de Nacionalidades Indigenas del Ecuador – and COICA – Coordinadora de las Organizaciones Indigenas de la Cuenca Amazonica – show the types of problems still facing indigenous communities that are not highlighted in governmental documents. Both of these organizations call for self-governing laws and fight for land and legal recognition of indigenous groups. In a time where the President of Brazil has already made changes such as placing the demarcation of land under the Ministry of Agriculture instead of FUNAI, it is necessary to understand how indigenous populations face issues beyond simply language preservation. In the context of endangered languages, protecting a language is much more than just that – it extends to protecting a community’s way of life and a community’s right to their heritage. These two organizations exemplify this.

Chanelle Dupuis is a senior undergraduate student at Florida State University in Tallahassee, Florida. She studies French and Spanish literature and linguistics with a special interest in endangered languages. She completed the inicial portion of this research under Dr. Tanu Kohli Bagwe at the Center for Global Engagement at FSU.